This morning at 10:43hrs, Good-Will Fire Company and Mutual Aid were alerted to a Residential Structure Fire in the 300blk of Moore’s Lane. Initial reports indicated possible entrapment. Engine 18 made an immediate response. Deputy 18 arrived and reported a 2 Story Wood Frame Single Family with Smoke Showing.

Engine 18 placed a 200’ pre-connect handline in service through the front door. While crews were operating, fire conditions caused several holes to open in the floor. 1 Firefighter fell into the basement and was entangled in wires. A MAYDAY was declared. The firefighter from Ladder 12 was quickly removed from the structure and was not injured. Crews extinguished the fire and spent several hours opening up and extinguishing hot spots. 2 alarms were needed to bring the fire under control. All searches of the home were negative, and there were no injuries. Deputy Chief 18 had the New Castle Command. The fire is under investigation by the Delaware State Fire Marshal’s Office. 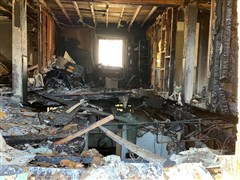 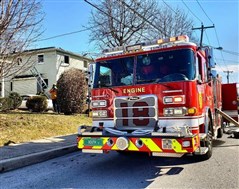 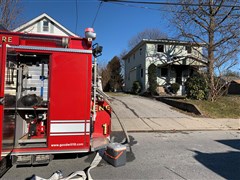