Just before 6:00pm, Station 18 was alerted to a Motor Vehicle Crash with a Rollover on River Road just south of Federal School Lane. Ambulance, Engine, and Chief 18 responded to the incident. Upon arrival, crews found all of the vehicle;s occupants had exited the vehicle on their own. The ambulance crew evaluated and transported the three occupants to the local trauma center for further evaluation. The engine crew checked for hazards and stood by providing lighting and traffic control until the vehicle could be removed from the roadway.

After clearing the incident, the Engine made the response to 12 Cheswold Blvd for a Multi-Residential Fire. Command 12 placed the incident under control as Engine 18 was arriving. 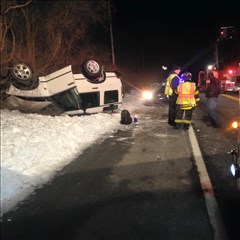