Brush Unit 18-1 was a 2005 Chevorlet Silverado 2500HD with a duramax motor and allison transmission and front mounted winch. The unit was equipped with a skid pump with foam system and 250 gallon water tank as well as an 8 gallon foam cell. The skid also featured a 150' 1" booster reel and well as 300' of 1" forrestry hose and 150' of 1 3/4" hose. Above the skid on either side of the bed were compartments carrying pump adapters, appliances, and nozzles as well as hand tools, indian tanks, a chainsaw and fuel, and a small first aid kit and AED. Below the skid was an area for shovels, brooms, rakes, and beaters. Brush Unit 18-1 was utilized to access small fires that were off the roadway or inaccessable to larger apparatus. In addition to its off road uses, the unit was also used to assist fire and EMS units in the snow and ice. During storms, additional manpower would staff the unit to make sure the ambulances and fire apparatus could get to where they were going and revocer them should they become stuck. In 2010, the unit was used to make access to and transport a patient from Swanwyck during a blizzard. The patient was in cardiac arrest and the crew was able to make it to the scene and transport the patient and other EMS providers to the awaiting ambulance on New Castle Ave. The crew received a unit citation from the New Castle County Paramedics for their actions that day. 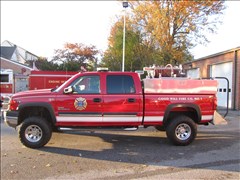 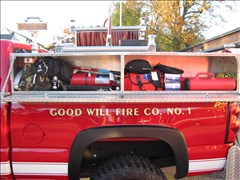 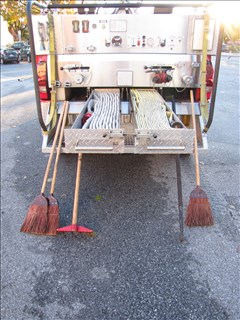